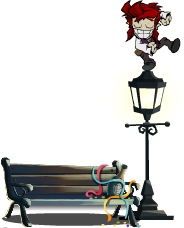 Lower your expectations! We’re having a “launch party” for MacGuffin’s Curse!

Okay, so what we’re actually doing is piggy backing on the very cool and well planned IGDA Melbourne event on Tuesday April 10th at The Workers Club, cnr Brunswick and Gertrude Streets, Fitzroy. The event is a wrap up of GDC experiences from the movers and shakers of the industry and will be the next best thing to being there, maybe even better!*

In keeping with this theme we’ll also be giving people a taste of what they would have experienced if they had forked out the cash to come all the way to San Francisco to see MacGuffin’s Curse at our GDC Play Kiosk. We’ll be running through the game, and enthralling you by talking about whatever pops into our head, including amusing anecdotes from our childhood, and what we think about the state of the economy. We’ll have Steam keys to give away, for performing some dangerous task or another, like… asking a question. And we’re rounding up as many of the team that are still talking to us to lend their awesome presence to the event.

Now, I know what you’re thinking “I thought this awesome game was releasing on April 19th?”. Don’t worry, your grasp on reality is sound, at least in this respect. The game will still be launching through Steam (PC/Mac) and the App stores (iPhone/iPad/Mac) on April 19th, but we just wanted to get a little pre-launch partying in. That and, I’m washing my hair on the 19th, so we couldn’t do it then.

I do all the boring stuff that's gotta be done so I get to do fun stuff sometimes.
View all posts by Andrew →
This entry was posted in News and tagged GDC, MacGuffin's Curse, party. Bookmark the permalink.