I’ve just had an epiphany, no small thing. It pertains to what I see as my direction in life.

For a long time, all through school at least, I had no direction, I thought I did, I thought I wanted to be a pilot, but really, that was just something I came up with because you had to do something when you finished school. As circumstance would have it, my eye sight was poor and I needed glasses, so the air force wouldn’t accept me into their training program, and pilot training was much to expensive for my family to consider. 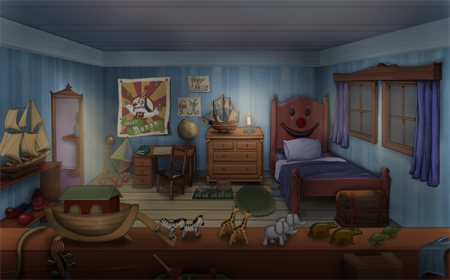 I was a loose end for much of my teenage life, trudging through years of school with no motivation to do well, for the sake of doing well. Each step towards school, with my bag full of books, just felt so pointless. The only thing I was ever good at was working with computers, and the only reason I was good at that was because I loved games, which I suppose contributed to my poor eyesight.

It never occurred to me that you could do something you could enjoy for a living, it just didn’t, you finish school, get a job and make money, hopefully a lot of money, because then you can live well, go on holidays, buy a nice house and car. That’s life.

This perceived view of life made me pay attention in my final years of school, the only ones that would ‘count’ in my opinion, not so much out of joy, but out of fear that I wouldn’t do well in life. This particular motivation allowed me to get a good enough score to go to uni to learn more about computers and, I supposed, eventually get a job working with them that would pay better than the average wage.

Mid way through uni, I think it was one of my first software engineering projects, I made a game in a small team. It was a text-based dungeon crawler where we had to generate a series of connected cubes and have a player navigate through them and achieve a series of quests. We came up with funny descriptions for all the rooms and humorous puzzles and situations. It was awesome!

This switched a light on for me. Could people do this for a living? They had to right? Otherwise where would the games come from? But aren’t all the games made in the US? It was then I sought and found a small games industry in Australia, it had never really done anything big, but it was there, and people were getting paid to make games.

I eventually made it into the games industry, first as a tester, then as a programmer, which is another story, and while it was good, and I made friends with some of the most interesting people I’d ever met, I never really found the same thrill as that first text-based dungeon crawler, though it was pretty cool seeing my name in the credits of games actually on shelves.

Was I happy doing this? Sort of. Certainly happier than I’d been in any other of the numerous jobs I’d had since I was legally able to work. But I never felt like implementing other people’s ideas was that exciting, I wanted to be the one creating the ideas, or at least putting in my two cents. I suppose that’s not entirely fair on the designers I was working with, what I really wanted was to be making different games entirely; point and click adventures in fact. Which is what lead me ultimately to start Brawsome.

I’ve been doing a lot of interviews recently for Jolly Rover, and in doing so I’ve been asked questions that have been putting my life in perspective. Throughout my life as I look back on it, I’ve always had idols, people I look up to and want to be like. One thing I’ve just realised is that my idols fall into two categories, comedians and game designers, and ultimately, comedic game designers.

Of course this pins at the top of my idol tree, the three talented individuals that crafted the first Monkey Island games, as well as those responsible for Space Quest, Quest for Glory and Leisure Suit Larry, Portal and to a slightly lesser extent the talented chaps at Homestar Runner. The work of the comedians Billy Connolly and Eddie Murphy played a large part in my childhood, quite against the wishes of my parents. Recent, though not so recent, years have seen comedians Jerry Seinfeld, Jimeoin and Ross Noble join the ranks of those I respect and admire.

Which leads to my epiphany. After releasing Jolly Rover, and looking back on the reviews, the thing I realise I wanted people to enjoy most on was the writing, which I hoped would make people laugh. I recently read an article on Gamasutra about making humour work in games. My particular take away from this was the lack of humour in recent games, and the difficulty of successfully pulling off humour in games.

All of this information must have bumped together in my head when I was making a cup of tea, and having one of those brief moments when I’m not thinking about anything in particular, because suddenly, as clear as day, I understood that my direction, my purpose, is to explore comedy in games, with particular focus on writing. 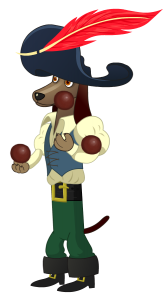 Not the most noble of causes I’ll admit, but for the first time I feel my direction has never been clearer. I feel like Gaius juggling wooden fruit before DeSilver and the Voodoo priest.

This might not seem like a big deal, but having a clear focus is a potentially life changing experience. What I read, watch, play and listen to, who I hang out with, the people I attract, what conferences I go to and sessions I decide take, which companies I approach, and what roles I apply for, what subtle things I notice about the world, the ideas I develop are all influenced by the core focus of exploring comedy in games.

Now, the next thing to work out is how I can get paid for this…