Some great news this week! Just today, Andrew was able to get a preliminary version of the game running on PC, Mac, iPad and iPhone! And here’s proof: 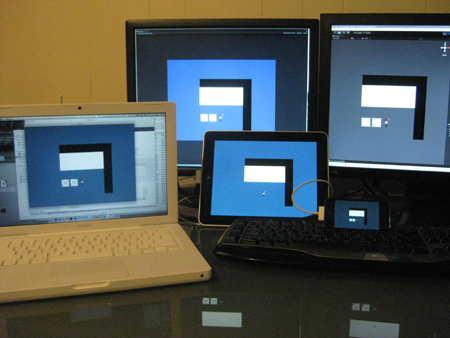 Hey hey hey, don’t scoff just yet. Like so much game development, the visually impressive stuff turns up near the end of the project. In the meantime, getting the same project to turn up on four different platforms, render correctly, and most importantly, not crash is always a huge cause for celebration. Having things do what they’re supposed to is a wonderful thing.

In other news, I’ve been plugging away at more exciting lists. If you want some lists, I am totally your guy. I’ve been busy outlining boss functionality so that we can estimate and budget for how many different animations we’ll need for all the different characters in the game. This has all been done now, which is a relief. So now I’ve moved from lists…to lists… of environment descriptions! It’s all non-stop action here.

Patching the holes, filling the gaps, and helping out when it's needed.
View all posts by Ben →
This entry was posted in Game Development and tagged MacGuffin's Curse. Bookmark the permalink.