I’m Awesome At This Game!

One of the things I learned early on during my game developer career is that it’s always important to reward your player. I’m not just talking about things you’d expect, such as unlockable content, finding new items that help you progress further in the game, and so on. There are also subtle, little things that are important which you can take for granted. 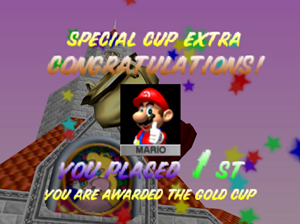 When I was performing QA at one company, we received a list of feedback from Nintendo Japan’s Super Mario Club for a racing game I was working on. This was really exciting and useful for me, as it gave me insight as to what can help the player enjoy the game more. For example: adding confetti to the race results screen, and making the trophy you received look bigger. These changes weren’t hard to make, and meant that the player felt like they’d accomplished something on each race. Giving your player a positive feeling is always important – it seems that sometimes developers can forget that games are meant to be fun!

In ten seconds, Nintendo has managed to make you feel like the most amazing person ever for crossing the finish line. And this happens every time you complete a level! Why wouldn’t you want to keep playing when it comes to positive reinforcement like that?

Patching the holes, filling the gaps, and helping out when it's needed.
View all posts by Ben →
This entry was posted in Game Development and tagged Game Design, MacGuffin's Curse. Bookmark the permalink.

4 Responses to I’m Awesome At This Game!